Decoy. You probably don’t recognize this card because basically no one has ever played it. 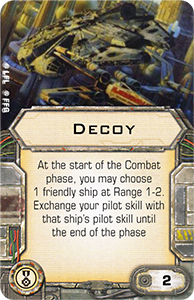 Actually, I used it once in a pirate tournament (no unique cards, only 1 of any given ship, no faction restrictions) on a PS6 Royal Guard TIE with the expectation that the PS5 Phantom w/Advanced Cloaking Device would be a popular choice, so I could give higher pilot skill to whoever happened to have a shot. Only 1 person brought a Phantom, and we didn’t play.

So, 1 recorded instance of Decoy in a gimmicky tournament, and none in regular play. What is this card doing? Did FFG just make a horrible mistake? Who knows, and maybe. But, I’m going to approach the card as if it has a viable use and see if I can figure out what it must be.

Let’s start by comparing it to its close cousin, Swarm Tactics, which allows you to give another ship at Range 1 your same pilot skill. Swarm Tactics has the advantage of not lowering anyone’s pilot skill, but Decoy has the range bonus. Range 1 bubble is pretty small, while the Range 2 bubble is quite large. But, the range bonus doesn’t seem to make up for having another ship shoot later. That’s quite the disadvantage. Except that as discussed here there can be a benefit to shooting later. (tl;dr: ships more likely to land crits should shoot later so you have a chance to remove defensive tokens and shields.)

Sidestepping the disadvantage of shooting later (and thus being more likely to die before you can fire), let’s look at ships with pilot abilities that are more advantageous the later they shoot:

Tarn Mison: Gets a Target Lock when declared the target of an attack. He wants to shoot later, after he’s gotten his free TL (assuming he didn’t just use it with R7). But, he’s already PS3, so he’s just where he wants to be.

Wedge Antilles: His ability to reduce the target’s agility makes him much more likely to land crits. But, he’s also so good at finishing enemies off that you probably want to keep him high in the shooting order to avoid letting the enemy ship get off a shot.

Eaden Vrill: He gains an attack die against stressed enemies, so you want him shooting after other stress mechanics have landed. But, like Tarn he’s PS3 already, and doesn’t need to drop in the shooting order.

Lt. Blount: His missile attacks always hit, a skill made specifically for Ion Pulse Missiles. If you’re running other ion weapons, you want Blount to shoot last. Wait to see if the other attacks land, and if they don’t, then Blount is your sure thing. With Decoy, he can let a Gold Squadron Y-Wing shoot its Ion Cannon before he decides whether or not to use the missiles. Since Decoy comes with the Z-95, this would appear to be the intended use, as it’s awful on Cracken.

(I was insufficiently coffeed when writing that part. Please ignore.)

So as far as the Rebels go, that seems to be it. Let’s take a look at the Empire now:

Maarek Stele: His ability to pick what crit lands makes him really want to not waste his shots against shields or Evade tokens. With only 2 native attack dice (until the Raider Expansion), he isn’t likely to penetrate any strong defenses. Letting him shoot last can make him much more effective.

Kir Kanos: He can turn an Evade token into a hit. This is a mediocre ability if he shoots before the enemy and has to decide whether or not to give up his Evade. But, it’s a great ability if he gets to shoot last. Normally you want to avoid shooting at a ship with 3 green dice and an Evade token and go for a softer target, but letting Kanos hold the token is dangerous. Unfortunately, Kanos doesn’t have an Elite Pilot Talent slot, so he can’t take Decoy. (And he wouldn’t want to, Push the Limit for Focus+Evade would make him a beast.)

That’s about it. There don’t seem to be any Scum pilots where Decoy is particularly useful. But, there is one very significant part to Decoy that I haven’t yet discussed. Since you’re trading Pilot Skill, you get to pick which of the two ships to put Decoy on. If you want Maarek and Rexlar to shoot later, you don’t have to give them Decoy. Instead, you can put Decoy on a Black Squadron TIE Fighter or a Royal Guard TIE Interceptor.

Decoy doesn’t let you just pass your pilot skill down to someone else, it also lets a pilot pull themselves up in the shooting order. With that in mind, let’s take a look at a pilot who really wants to shoot earlier:

Garvin Dreis. After spending a Focus token, instead of discarding it he may assign it to another friendly ship at range 1-2. He’s PS6, so if he’s flying with other ace pilots, the added Focus isn’t a huge benefit. It can help on defense, but you’d really like him to set up a nice TL+Focus attack, or let a B-Wing barrel roll while still getting a Focus for firing. Without Decoy, Garvin has been pretty lackluster, only really useful in a squad using R5-P9.

Of course, Garvin doesn’t have an Elite Pilot Talent, so you’ll need to give him R2-D6. After that, the question becomes who he ought to trade with. An X-Wing ace like Luke or Wedge might make sense. If you’re letting Wedge take TL+Focus, he doesn’t need the Predator talent that’s very popular on him. He could take something like Outmaneuver or even Adrenaline Rush instead. Or, you just have Garvin there to help Wedge modify his attacks after pulling a K-Turn.

What I think would be particularly interesting though is Garvin flying alongside Jake Farrell. When Jake takes a Focus action or is assigned a Focus token, he may perform a free Boost or Barrel Roll. (Garvin actually says to “place” the token, not “assign” it, and this hasn’t been addressed in the FAQ, but I’d read them as meaning the same thing.) Jake could take his move, Focus, Barrell Roll, then Garvin shoots, spends his Focus, gives it to Jake, who then uses it to Boost. Alternatively, Jake takes an Evade action, then Garvin passes the Focus, and Jake can use Push the Limit to take both actions. This is great if Jake is up against higher pilot skill ships and needs to adjust his position after everyone else has moved. It also creates a bizzaro quadruple action Jake. With Test Pilot, you have the option of putting Decoy on Jake (while still having another EPT) or Garvin with R2-D6.

But, I think the better option if you want to pull this type of gimmicky thing with Jake is either just Cracken since he’s much cheaper. Kyle Katarn also works.

And now finally, at long last, the real thing Decoy is actually useful for: Phantoms.

The bane of Whisper is ships that shoot at Pilot Skill 10. They catch him with her pants down, with only 2 green dice, 2 shields and 2 hull, she’s little more than an overpowered Z-95.

One way to counter this is to take Rear Admiral Chiraneau or Boba Fett with Veteran Instincts, and then put Decoy on Whisper or Echo. If your big ship has an Engine Upgrade, it should be easy to keep them within Range 2 of each other (with a bit of planning and practice, of course), and now you’ve got yourself a PS10 Phantom. Enjoy pissing off your local meta.