If you were looking for a detailed breakdown and analysis of Paul and Duncan’s squads for Worlds, you’ve come to the wrong place. With the World Championship fast approaching, the meta analysis will be sending the squads of our Worlds-bound players into a black box. Nova hive-mind conspiracy confirmed.

But really, it’s a compromise so y’all aren’t left entirely in the dark. You won’t get to see many of the squads, which have been given code names (indicated by the parenthesis), but you will get to see how much the local meta is or isn’t gravitating to one or two squads. So without further ado, here’s the breakdown of squad archetypes. Discussion to follow.

This is based on only 2 tournaments so far (since Wave 9 came out) with 56 total players and a little over 90 matches. As always, this is based on what’s winning, not just what shows up. 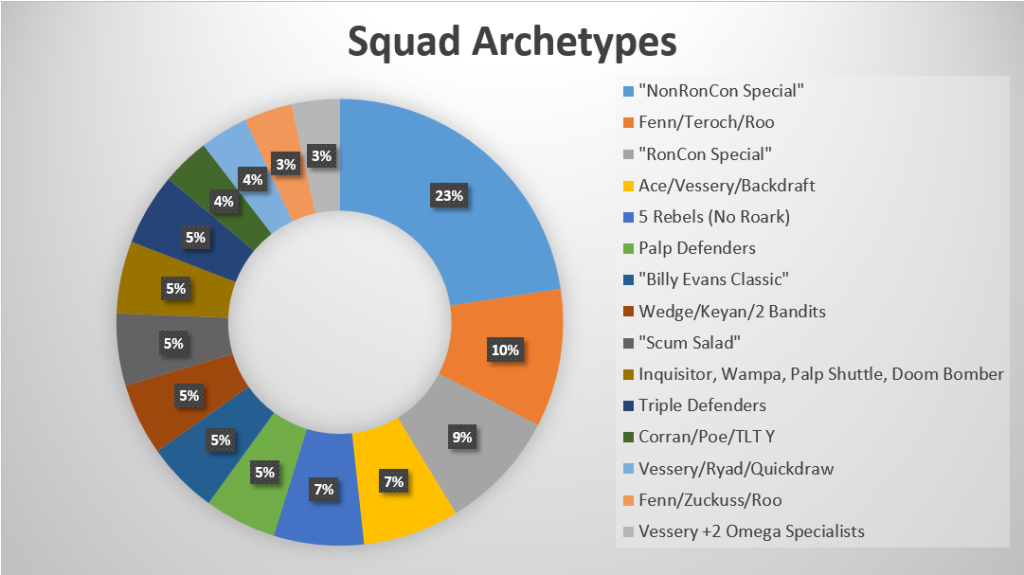 This is the only chart for now. I was going to add the Pilot Skill and Initiative Bid chart, but the data was a little too telling. That will come out later as the haystack gets bigger.

As far as the code named lists go, all I will say is that they are each different enough from the other things listed that they would be listed as their own archetype even without the code names.

So now what does all this tell us? I don’t know. But I do know what I will be telling you.

I routinely see on the various X-Wing forums complaints about how there’s only a couple viable squads, and each faction only really has 1-2 options. Palp Aces and Dengaroo are the only viable things out there, or something to that effect. That’s all bologna.

Between the release of Imperial Veterans and Nova Open, there were 55 different squad archetypes in the local meta that had winning tournament records. If you asked people what the most viable squads were, no one would have said Lothal and Warden, or Kanan with an Ion Turret and Biggs, or Miranda and Esege. Dengaroo was the only meta squad to make it into the top 4 at one of the biggest tournaments of the year (107 players — just a bit bigger than US Nationals if I recall correctly). They probably wouldn’t have named Mishary’s TIE swarm either, and it placed #1 in Swiss. I went to top 4 of US Nationals with a Bossk and Tel list that had never done better than 2-1 in the local scene. Last year, if you asked people to name the viable squads going into Worlds, you’d have heard about Fel/Vader/Palpatine, Brobots, Thugs and Drugs, Triple Aces, and 4 TLT Y-Wings. No one would have said Rebels, and you wouldn’t have guessed the whole thing would have been won by Poe, Stresshog, TLT Y, and a Bandit. It didn’t win tournaments before Worlds, and I don’t recall it winning any local events after. So if you asked the geniuses on the internet, the World championship squad wasn’t viable.

We’re just 2 events in to the new wave, and already there’s 15 different squad archetypes that are producing winning records and even a bit of variation among squads in the same type.

What’s viable now? A lot of stuff. But, only if you’re willing to put in the time to carefully craft a squad, understand how it works, and figure out the dynamics of various matchups. Odds are the next world championship squad hasn’t even made it to the mats yet. But, if by “viable” you mean “viable as a plug’n’play netdeck squad,” then I don’t know what to tell you. Except, maybe, go play Hearthstone instead.